I like watermelon rinds even better than watermelon. I went to Catholic school from first grade through my senior year of high school which explains a few things about me: my fetish/terror relationship with plaid skirts, my panic reaction to small, lockable booths, my chronically inflamed guilt gland. But perhaps most significantly, my gut-deep aversion to wasting food. Not only did I have my grandmother linking blame for the “starving Armenians” squarely to my failure to choke down the last two bites of liver and lima beans—our school principal, Sister Mary Thomas, would daily glide through the cafeteria wagging a gnarled index finger at anyone dawdling over their sloppy joe. It’s a sin to waste food, she said, and I believed her. Still kinda do. So I eat watermelon rinds.Have you not? They’re satisfyingly crisp and cool, stand just shy of sweet and won’t drip stickily down your chin, staining your white uniform oxford and again, earning nun-wrath. But even if you’ve been leading a nun-less existence, they’re still delicious. Watermelon rinds are traditionally put up as pickles, but cookbook co-authors and Southern Uncovered hosts Matt Lee and Ted Lee (a.k.a. The Lee Bros.) developed a watermelon rind preserves recipe that underscores their off-fruity crunch with notes of ginger and lemon—and produces a little bit of lagniappe in the form of excess syrup that makes an instant cocktail, just add bourbon. No waste, no guilt—none at all.Lee Bros. Watermelon Rind PreservesWatermelon rind preserves on buttered biscuits or toast is one of our favorite breakfasts, and these days watermelons are available virtually all year long. Until recently, the labor-intensive recipe for watermelon rind preserves kept us from making them at all. The typical recipe involves one (if not two, even three) overnight soakings in lime and/or salty brine; scraping down the watermelon flesh until it’s snow-white; and making sure the rind is the right thickness (it varies widely from melon to melon). We took the traditional recipe back to the drawing board and came up with quicker, easier, and more delicious watermelon rind preserves than any we’ve made before. Another thing: don’t spend precious kitchen time scooping off the pink flesh until the rind is bone-white. A few millimeters of pale pink watermelon clinging to the rind makes the preserves absolutely gorgeous, like rose-tinted quartz. A 6¼-pound slice of a larger, whole melon with a medium-thick sliced rind should yield 8 cups of peeled rind and make 2 pints of preserves. We’re usually left with more gingery, lemony syrup than we need. We bottle that, too, and use it to glaze baked ham. We also substitute the syrup in drink recipes that call for simple syrup; it gives a glass of sweet tea an otherworldly sweetness, and you can use it as inspiration for your next breakfast cocktail. Recipe from The Lee Bros. Southern Cookbook: Stories and Recipes for Southerners and Would-be Southerners used with permission of The Lee Bros. comment tenir au lit recettes.

WATERMELON RIND PRESERVES RECIPE: HOW TO MAKE IT 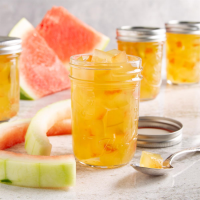 This is an old-fashioned recipe and a wonderful way to reduce food waste. Watermelon rind preserves are not like traditional preserves that you buy in a grocery store. They are more like candied watermelon pieces in a cinnamon-spiced syrup. The watermelon pieces can be eaten plain or stirred into cakes and cookies, as you would use candied cherries, pineapple or citrus peel. Spoon the sweet syrup over warm buttered biscuits or stir it into hot or iced tea for sweetness. —Peggy Woodward, Shullsburg, Wisconsin